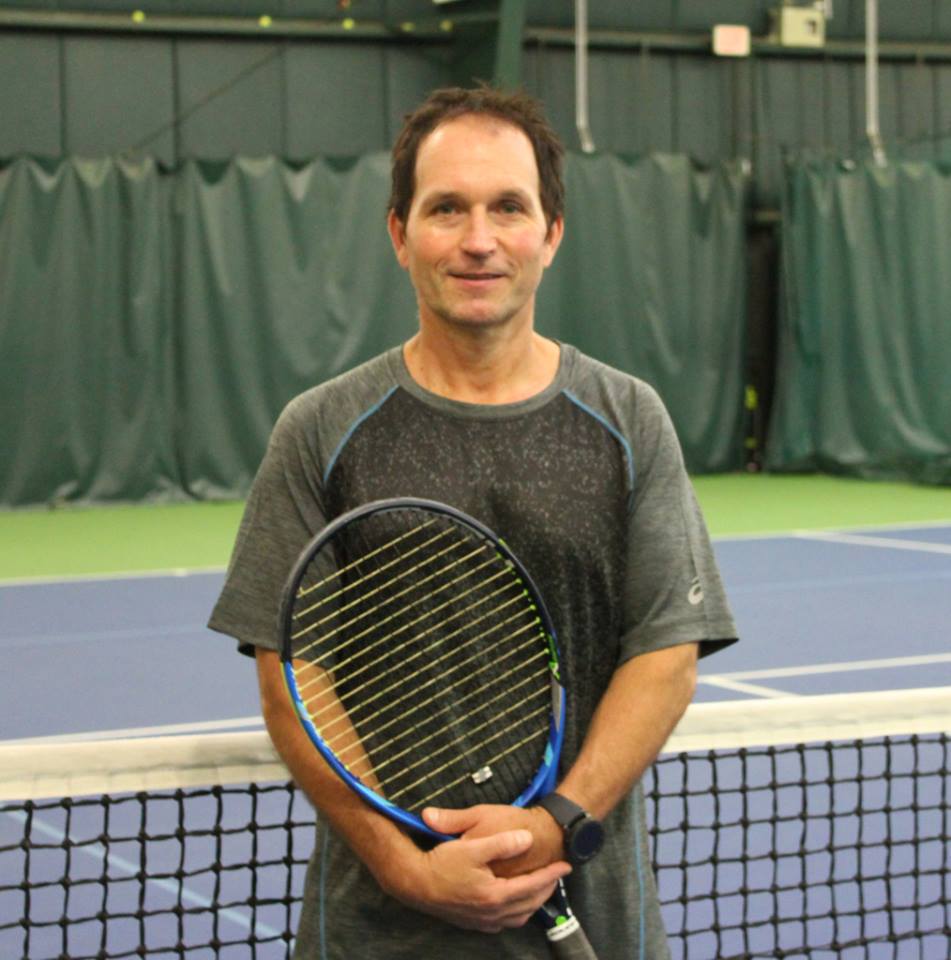 It is with great pleasure that I would like to introduce you all to the newest member of The Shrewsbury Club Family, Brent Gruno! Brent will be our 12 & Under Tennis Manager, but will also teach adult tennis teams, beginner tennis, tennis camps, recreational tennis, social tennis, cardio tennis and many other tennis related activities. Please reach out by email to Brent for a complimentary tennis assessment: brentg@shrewsburyclub.com.

Brent started playing seriously in 8th grade and by high school he was the captain of his high school’s team for 3 years and the #1 player for 2 years! He played collegiate tennis at Central Missouri State and Jefferson College where he finished top 20 Nationally. He continued playing and earned titles including 2 time Show Me State Champion, top 10 and number 1 rankings in Men’s Open, Men’s 35’s, and Mixed Doubles in Missouri Valley. His highlights include multiple USTA singles Sectional Champion, top 20 Nationally Ranked in Men’s 35 singles and 9.0 World Team Tennis National Champion.

Brent has held various positions at several tennis clubs in the country and has worked with all ages and levels including NCAA Division I players, multiple DBH and CMASS Champions and Nationally Ranked Wheelchair players.

Brent Gruno was recently hired as the head coach of the Assumption Colleges Men’s tennis program.

“I am very excited about becoming the men’s tennis head coach at Assumption College’, I look forward to developing strong, positive student-athletes as well as share my experiences and training over the last 20 years in the tennis profession. I will do my best to help the team succeed and accomplish their goals, both on and off the court.”

Brent has spent over 20 years as a tennis professional in the Midwest and the Northeast. He has coached numerous collegiate tennis players, including many which have competed in Division I, throughout his tenure at various clubs. Two of his former pupils have gone on to Division I head coaching positions, at Southern Illinois and Seattle University respectively.

While coaching he also played competitively, winning two Missouri State Championships, as well as being a USTA singles Sectional Champion, a 9.0 World Team Tennis National Champion and nationally ranked in the top-20 in Men’s 35 singles.

Previously, to Brent served as the Junior Tennis Director at Wayside Athletic Club in Marlborough, Mass. where he trained and oversaw the junior tennis program, which trained and developed players from 6 to 18. He also recently became certified as a USTA Net Generation Coach.

He came to Wayside from Westboro Tennis & Swim Club, where he served as the senior professional. In that role he developed all aspects of juniors and adults, coaching numerous New England ranked juniors. In addition, he was in charge of the varsity program for all high school players. Prior to Westboro he spent three years at Mount Auburn Club in Watertown as a tennis professional, where he assisted in the junior program, as well as managing and coaching the adult men’s and women’s USTA and CMASS.

Brent came to the New England from Illinois where he spent over ten years working at two different clubs as a tennis pro. He taught private lessons from beginners to nationally ranked juniors, who went on to earn Division I scholarships.He also coordinated various tournaments for multiple age groups, as well as managing a pro shop.

Brent played his collegiate tennis at Central Missouri State and Jefferson College, where he concluded his career as an All-American and finished in the top-20 nationally. He currently resides in Worcester with his wife.

Stay up to date with the latest information, events and activities.